Bradford J. Smith (May 23, 1925 – June 16, 2016) was an American photographer. He worked in the fashion and advertising industry in New York City (NYC) during the 1940s and 1950s.  He then worked as an industrial photographer capturing images of turbines for General Electric (GE) in Schenectady, NY.  In later years he was a prolific landscape photographer based out of Saratoga Springs and Schenectady NY and a familiar and valued member of the Capital Region art community.

Bradford Smith was born in Galway, New York, in1925 and raised in Ballston Spa, New York. He grew up on a dairy farm with his parents John Platt (1889), Mabel Leah (1890) and seven siblings: Geraldine Ruth (1916); Emma Josephine (1917); Stanley Major (1921); Bradford Jansen (1925); Barbara Jane (1926); Donald Joseph (1930) and Nancy Louise (1932). He learned photography as a child from his grandfather, Joseph Dunlop, who owned a photography studio in Sacandaga Park, NY.   Influenced and inspired by his grandfather Bradford had first photograph published at the age of 12 in Better Homes and Gardens magazine.  In Brad’s own words “After graduating from high school I knew I didn’t want to milk cows anymore, so I went to New York City to become a great photographer…”

In 1941, Bradford moved to New York City to pursue a degree and career in photography. He attended The School of Modern Photography at NYU, the Pratt Institute in Brooklyn and The Fashion Institute of Technology.  Bradford proudly obtained a bachelor’s degree in the graphic arts. 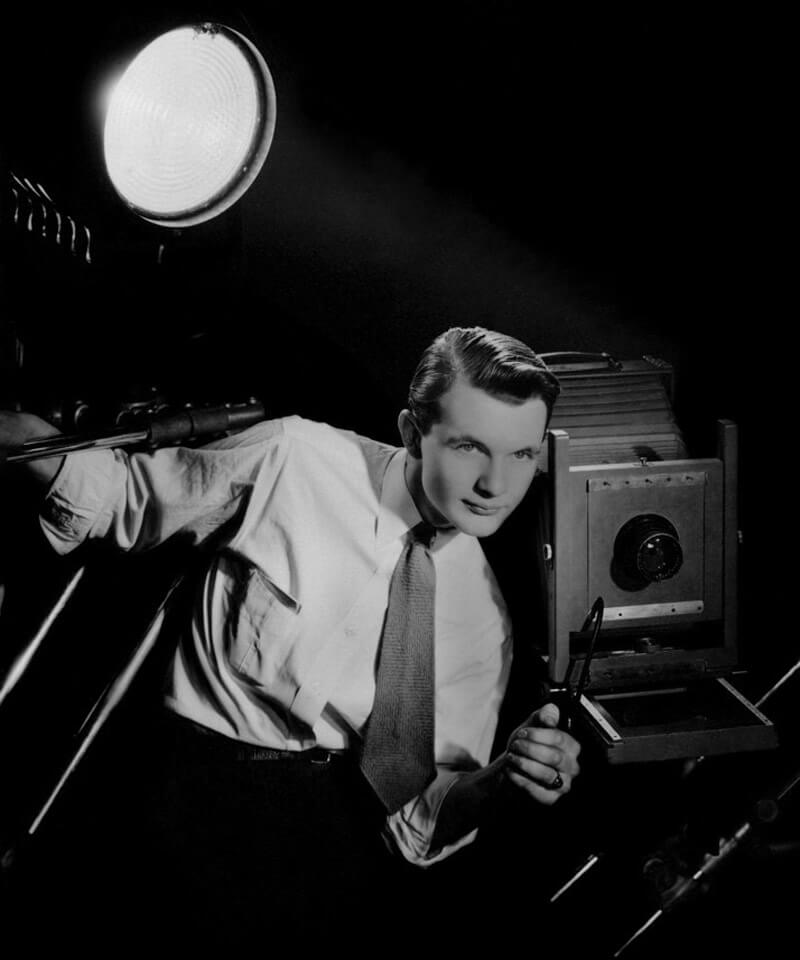 During World War II, Bradford made training films for the U.S. Army Signal Corps while also working as a photographer’s assistant under the guidance of mentors Victor Keppler and Philippe Halsmann. He became a staff photographer for the New York Herald Tribune under Keppler where he was guided by Fritz Henle, another mentor. After an exciting stint working for Mayor Fiorello La Guardia  and “photographing 60 stories up on an I-beam” Mr. Smith changed careers from photojournalism to fashion photography.  “Newspapers would pay you $5 a shot, while the agencies would pay up to $2000.  There wasn’t much to think about,” said Mr. Smith.  He spent his days photographing the latest fashion trends for Women’s Wear Daily. He then worked as a preferred independent contractor for Harper’s Bazaar under art director Alexey Brodovitch and co-editor Ann Whitney.  After hours, Bradford managed his own studio where he photographed many models and aspiring actresses such as  Lauren (Betty)  Bacall. Bradford’s images and negatives were later sold to Humphrey Bogart. While working on contract for Harper’s Bazaar, Bradford opened a studio and partnered with Ann (Ruth?) Whitney on various photographic projects in the American and European fashion markets. He did projects for Cosmopolitan and Mademoiselle, Madison Avenue advertising agencies and shot all the department store windows on Fifth Avenue late at night. He also worked directly for Walter Cronkite as a film editor. In 1958, a book of his figure studies, entitled The Nude, was published (out of print). In 1959 he contributed a number of his photographs for another book, entitled Modern Dance (out of print). In the 1960s, following the lure of American advertising campaigns such as “see the USA in your Chevrolet,” Smith hit the road for a year of cross-country adventure before returning to his roots in Ballston Spa, where he bought “The Brookside” a 52 room hotel built by Stephen Douglas in 1792, the building is now known as Brookside Museum. At Brookside, Bradford created apartments and established his second professional photo studio. He eventually donated the Brookside to the Saratoga County Historical Society. For the next 22 years, Bradford worked as an industrial photographer for General Electric (GE), Schenectady, NY, then he founded and owned several businesses including Digimatrix, DataFlow, and National Direct. When Bradford retired from business in the 1990’s, he dedicated himself to photography full-time. He traveled the country, photographing the Adirondacks, national parks, lighthouses and landscapes. He created the Bradford Gallery and became a strong member of the regional artist community.

Bradford Smith documented a variety of his photo genres in book form.  In 1958, Bradford published a book of his figure studies, entitled The Nude.  In 1959 he contributed a number of his photographs for another book, entitled Modern Dance. These are now out of print.  In his later years, Bradford always had a book he had just completed or a new one in the works.  These include include Faces of Man, From NY to Florida, and Life in Sacandaga Park 1880 to 1935.

After Hours was begun in the months prior to Bradford’s passing.

Bradford Smith – A Retrospective Celebrating 75 Years Behind the Camera

A Family of Art (One man show)

Journey Down the Hudson (Juried show)

Faces of Man: A Look through the Lens of Bradford Smith (One man show)

Lore and Lair: An Artist’s Vision: The Work of Bradford Smith

The Lens of Power, Photographic Art by Bradford (One man show) 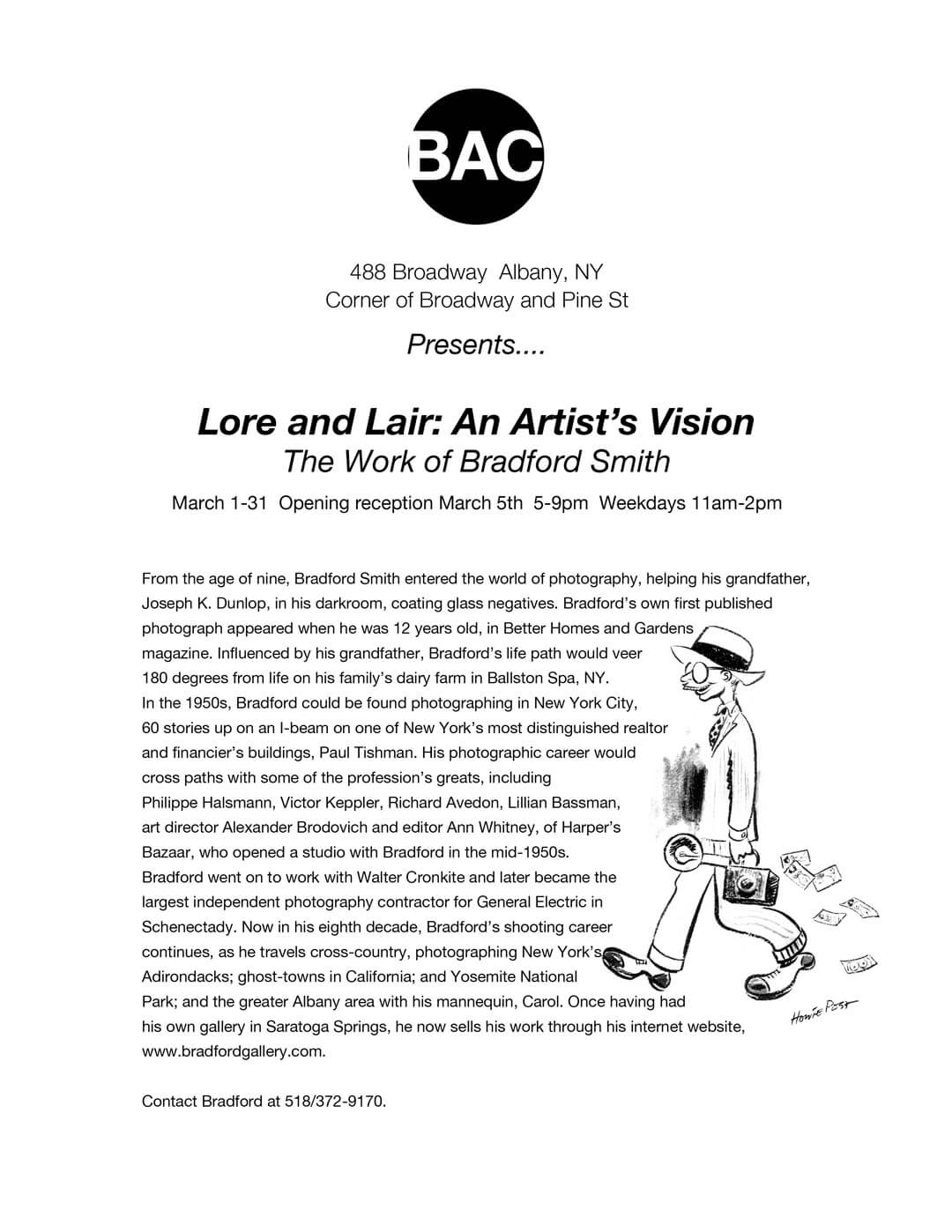 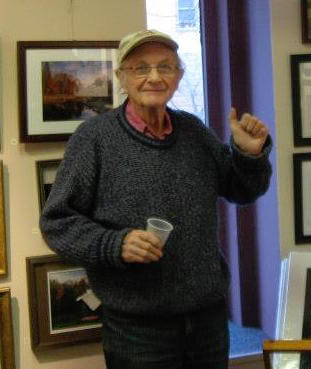